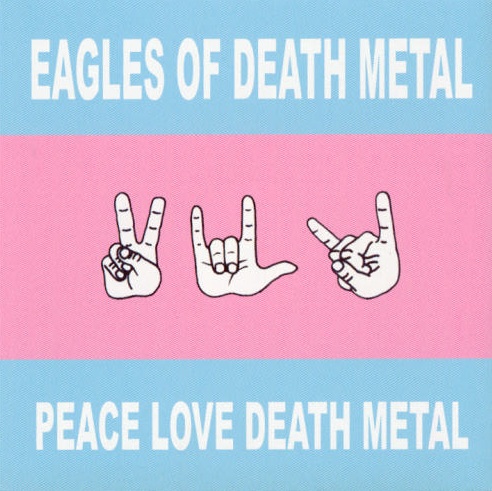 I have revisited this album hundreds of times and still love it as much as I did when I first heard it.  It is absolute genius. The sound, the lyrics, the humor, the naïveté. It’s perfection.

Jesse Hughes, frontman of Eagles of Death Metal, formed this project after going through a life-changing divorce.  Because of this, he felt very unsexy and reconsidered the future course of his life. He takes a complete detour, with the result being Peace Love Death Metal. Of course, Jesse Hughes does not do this journey alone.  Along by his side is Josh Homme of Queens of the Stone Age, steering him into promising territory.

This journey takes you as a listener through a series of emotions. The first few songs, “I Only Want You” and “Speaking in Tongues,” bring you immediate pleasure and satisfaction. You’ve been drawn in under false pretenses. Soon enough, the heart of the album is exposed, empty and lonely in “Midnight Creeper.”

I can listen to this album and notice something new with each listen.   And as I age, I appreciate different aspects of the album with a new lens. I still listen to this as a 26-year-old; I was 16 when this album was released. I’ve been listening to this for 10 fucking years!  But this album has left me with a lasting impression I can’t shake, even if I tried.

As I listen to this album, I separate the artist and the work.  I have met Jesse before and unfortunately, I do not really care for him as a person. In addition, subsequent EODM albums cannot compare to the magnificence of this first gem. But thankfully, the present does not impact this album. It is a time capsule, encapsulating a specific feeling at a specific time.   I can’t deny the fact that this is a piece of art.