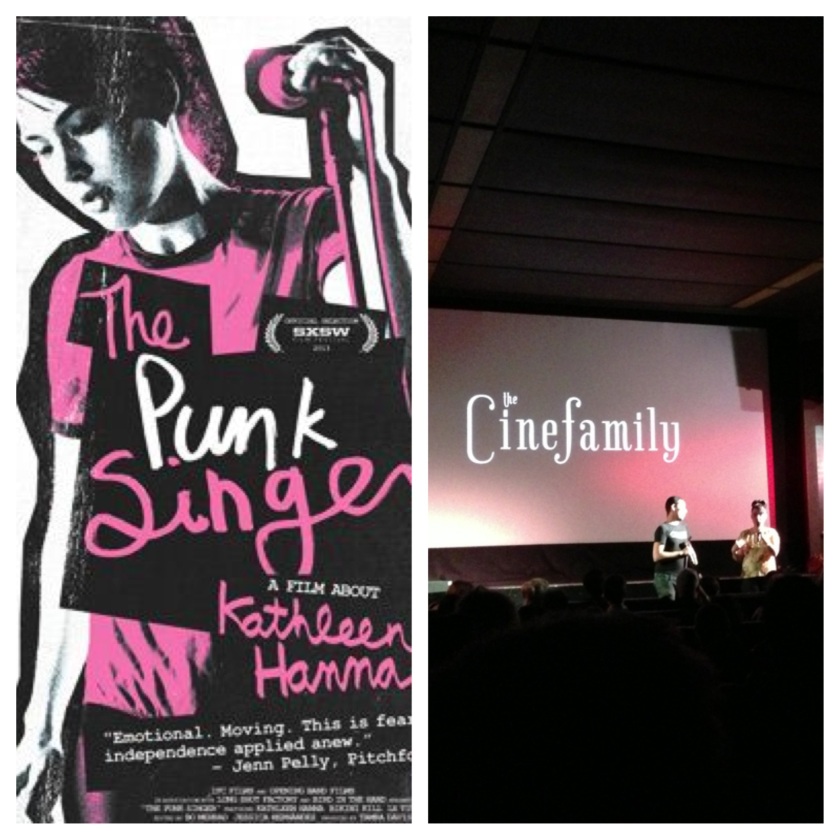 This review’s a bit older, since I went to the screening like a month ago.  But since the film hasn’t been released yet, I figured I’d still post this.

I was in elementary school when Bikini Kill broke up.  When I was in high school, Le Tigre announced they were going on a hiatus.  My full awareness of Kathleen Hanna and her influence came in college, mostly secondhand, seeing it through her musical descendants, bands like the Gossip and Mika Miko.  But these bands drove me learn more about Kathleen Hanna and riot grrrl.

I have since become slightly obsessed with the idea of riot grrrl.  When I was in elementary school, my idea of feminism was through artists like Alanis Morissette, Gwen Stefani (of No Doubt), and Shirley Manson (of Garbage).  It was an accessible kind of feminism, because they were vocalizing things I could understand.  Bikini Kill was important on a different level because they were discussing the undiscussed.  Complex feminist issues like rape, incest, and violence.

Bikini Kill were/ are immensely important. They had a platform where they were able to say what so many women wanted to say.  Their presence has influenced and will influence women for years to come.

The Punk Singer was an inspirational documentary to me.  It made me want to go out and create music.  I’ve read about Bikini Kill shows, and I’ve read about the Sex Pistols’ live shows having this type of influence.  Unfortunately, I was not able to witness them live first-hand, but the movie kind of had that impact.  It was great to hear different perspectives on Kathleen Hanna and what her presence in music meant to them.  Interviews in the film included women like Ann Powers, Kim Gordon, Joan Jett, Carrie Brownstein, & Corin Tucker.  Hearing these perspectives was kind of like going to a concert and hearing the excitement from people about the band they are about to see.  Even going to this screening and seeing all the ladies in the audience who still held riot grrrl/ Kathleen Hanna in such high esteem was amazing.  Seeing the live footage on a big screen and being able to hear Bikini Kill’s music super loud, was so incredible.

Kathleen Hanna spoke about her upbringing in the movie and how this shaped her as a person.  One story that stood out was a “trust fall” test between her mother and herself.  Kathleen caught her mother when they did the first part of the test but her mother did not catch her.  Her mother said that it was a lesson to Kathleen to never trust anyone, even her own mother.

The film answered many questions for me, because everything I know about Kathleen Hanna was received mostly secondhand from books and magazines speaking about her (not interviews).  To hear her speak about her own experience directly was informative.  It was sad hearing about the long process of her getting diagnosed with Lyme Disease and getting treatment for it.  When she left Le Tigre a few years back, she reasoned she said everything she had to say.  She explained in the film that she was lying and was feeling gravely ill, but did not want to admit it to everyone.

The good news is, she’s on the mend and doing much better.  She’s back in action with the band the Julie Ruin (I wrote a brief review on one of their LA shows).  The evening was extremely moving and to top it off, Kathleen Hanna did a quick Q&A.  A self-described  riot grrrl  in the audience said to Kathleen Hanna that it was “surreal” to be able to see her in person.  Kathleen Hanna responded with framing her hands around her face and moving them back and forth (so she looked “surreal”).  It was a great Q&A and gave many fans the opportunity to speak their mind.

I have never been prouder to have a blog called “Valley Grrrl” after seeing this film.  The film discussed the importance of feminism and why there has been a resurgence of girls searching for riot grrrl or starting their own movements.  Bikini Kill were so incredibly powerful and it’s awesome to see that now Kathleen Hanna’s important presence has properly been documented.