Sometimes there’s a band that you see live that are just incredible.  Their music seems to have mainstream appeal, while still sounding great musically.  You wonder why they haven’t garnered more attention, buzz, success… everything.  Most of the time, they’ve paid their dues, and seem to be working their way up.

Here are a few bands, Los Angeles locals, that I believe are examples of this:

The Lonely Wild clearly have a vision when it comes to their sound.  The band name says it all, there’s a heavy indie rock  influence (a certain loneliness), but their music also has a wild west type feel.  The Lonely Wild put on such energetic live shows and anytime I get an opportunity to see them, I go.  Every member of their band is on their game at live shows and they really make an effort to connect with their audience.  Unfortunately, their studio work does not exude the same energy from their live shows.  Their most recent album feels a bit over the top at times.  But hopefully, in the near future, they will work with a skilled producer who will help them expand their sound.

Their next show in LA is on August 18 at Echo Park Rising and it’s free! 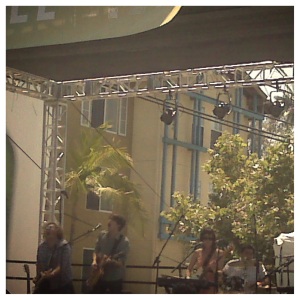 It’s very sad that Voxhaul Broadcast are no more.  They were always on the cusp of becoming something bigger, but never quite made it through.  With the release of their last album, they got some radio play on LA radio stations KROQ (the Locals Only show) and on KCRW.  They had a Strokes-type feel, but they created such an unusual mixture of sounds with their music.  They really created a soundscape that transported the listener to a different place.  The first time I saw them was in a very small garage that was absolutely packed.  The sound system was crap, but it was clear that the band was talented.  I went on to see them many more times and they were one of the most solid rock bands I’ve ever seen.