FYF is always one of the best things about summer in Los Angeles.  Sean Carlson, founder of the festival, consistently puts together a fantastic lineup.  This year was no exception.

Here are some highlights from the festival.

Last year Kumail Nanjiani was supposed to perform in the comedy tent, but cancelled without warning.  This year, he was initially on the lineup, was taken off, and was added days before the festival on the FYF phone app.  His set was definitely the best comedy set on Saturday and resonated well with the audience.  He was super familiar with FYF’s demographic, he’s on the TV show Portlandia, and knew what material would go over well.  Kudos!

METZ are a solid punk band.  FYF started out 10 years ago as a DIY festival, so it’s great that there are always punk and hardcore bands on the lineup.  METZ were full of energy and interacted well with the audience.  It was very cool to see them at an outdoor festival, especially because there were mosh pits forming (okay, 1).  They put on a fun show and helped start the festival nicely. 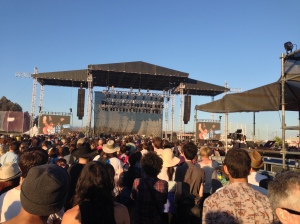 The Breeders are such an influential band, hopefully most attendees did not miss them.  They played their album Last Splash in its entirety and celebrated its 20th anniversary.  For most of the people in the audience, largely 20-somethings, they were not even musically aware of The Breeders at the peak of their success.  The band had such a positive chemistry on stage and it was a great performance of the album.  They even brought the original wind chimes they used on the album to use in this very special show. 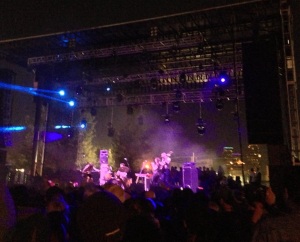 Black Flag were a quintessential LA band and have had a huge influence on the LA music scene.  It was super appropriate to see FLAG (with members of Black Flag) with the LA skyline behind them.  Their set was about an hour long, a lengthy set for a band with 2 minute songs as their average.  It was a good balance to see Keith Morris and Dez Cadena (he introduced himself as “Uncle D”) trading off on vocals, although Keith Morris undoubtedly has a better stage presence.  Even though the band members are all over 47, their age is no hindrance and they were able to play a fantastic show, with more energy than most younger bands.  Stand out songs included “Wasted” and “Gimmie Gimmie Gimmie.”  Fuck yeah.

I did not get to see all of Charles Bradley’s set, so unfortunately, I did not get the full experience.  However, he is an undeniably powerful vocalist and performer.  He hugged the audience at the end of his performance and seemed to be genuinely thrilled to be at FYF.

The Locust are a band best enjoyed live.  It’s the only arena where you can fully comprehend the intent of their music.  They are dressed like flies and sound like what music would probably sound like to a fly.  Or some kind of bug, it coincides with their band name regardless.  This was one of their first dates back together as a band after an extended hiatus, so they were fresh and ready to play.

Fear of Men’s band name alone is awesome.  They started Sunday out on a high note and maintained a decent sized audience for the majority of their set.  Pretty good, considering a large portion of the crowd showed up later in the day, probably nursing hangovers.  It should be exciting to hear more about this band in the future.

Chelsea Wolfe’s performance was astounding.  Goosebumps swarmed my arms during her set, it was everything I hoped it would be. The set was beautiful and hypnotic.  Her voice is strong, operatic, and commands attention.  All her dedicated fans were standing toward the front of the stage, silent and fixated on her throughout the set.  Even though she played in the daylight, the set was just as impressive as if she had played in the seemingly more appropriate dark.  She played a lot of new music from her upcoming album, Pain Is Beauty.  She is Goth, at its finest.

!!! always puts on a fun show.  When they started, about half the crowd was dancing, but as they progressed, they were able to even convince the most resistant audience members to dance.  !!! just have that effect over people.  Lead singer Nic Offer is so enthusiastic and entertaining as a front man.  He wore short shorts with the album cover for Rolling Stones’ Some Girls printed all over them.  It was so appropriate and am convinced it also improved his dancing abilities. 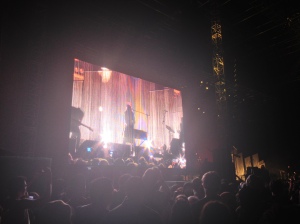 Beach House are moving live.  They take you away from where you are in the present and into a different world.  They put you into a dream-like state.  Even though they have light show, they don’t need any theatrics.  Their music speaks for itself.  They evoke an emotional response from you live.  There is something soothing about Victoria Legrand’s voice.  The textures and sounds Beach House are able to create with three people are absolutely stunning.  They played for one of the largest crowds of the weekend.  Their sound is larger than life and it was great to see them properly recognized.

Cameron Mesirow’s vocals were ok, but the woman who played the percussion instruments was incredible!  She played with four mallets on the vibraphone during much of the set and was also able to easily transition over to drums.  She was really impressive.

I used to listen to Loveless all the time, so I was super excited to see My Bloody Valentine live.  Unfortunately, their set was really loud.  I have been to hundreds on concerts in my lifetime and this performance was without a doubt, the loudest.  It was so loud, that the sound was a bit distorted and was not enjoyable.  Thankfully, they played my favorite song of theirs, “I Only Said,” first in their set, so I didn’t have to subject my eardrums to the rest of their set.

There are 2 festivals I look forward to each year: Culture Collide and FYF Fest. Both festivals have their separate histories but bring great acts to Los Angeles

FYF started as Fuck Yeah Fest and eventually just turned into FYF Fest.  Just wanted to clarify that.  The first year I went to Fuck Yeah Fest was in 2008 with bands like Mika Miko, The Mae Shi, No Age, Matt & Kim, and Abe Vigoda on the bill.  That year took place at a bunch of different venues in Echo Park and was a perfect location.  The festival won me over and I knew that I was definitely coming back.  Unfortunately, the super convenient Echo Park setup wouldn’t last because they were at capacity in ’08.  I still followed FYF and continued to look forward to the local “FYF Presents” shows as well as the annual festival.  The festival has grown and grown each year and has continuously given me the chance to a variety of bands who put on incredible live shows, such as Glass Candy, Man Man, !!!, Refused, Father John Misty, Warpaint, and Future Islands.  This year’s lineup is also exceptional, my favorites include Beach House, Chelsea Wolfe, TV on the Radio, My Bloody Valentine, and the Breeders.  Every year, Coachella gets all the attention for bringing the next best bands to town, but FYF Fest does it way better.  Not to mention, the comedy tent is always a blast.  The best comedy performance I ever saw was Josh Fadem in 2010.  This tweet sums up his performance.  Check out the lineup here.

Filter Magazine’s Culture Collide festival goes under the radar each year.  It’s a newer festival and I’ve gone every year since its inception in 2010.  Unlike many festivals where you have a plan in mind on who you’re going to check out each day, it’s best to try and check out all the bands playing.  Many of them won’t have another chance to play in LA for a while, since they’re lesser-known bands traveling from different countries.  Each year, it’s held at a variety of venues in Echo Park, so everything is within walking distance (it’s pretty much the same setup as FYF in 2008).  Some bands that have played in the past include Monotonix (Israel), Fran Healy (UK), Descartes a Kant (Mexico), and Mr Little Jeans (Norway).  Culture Collide never disappoints with great prices for the 4-day fest and happy hour for early birds.  It’s a great opportunity to expose yourself to good music from distant (and not so distant) places.  Check out this year’s fest